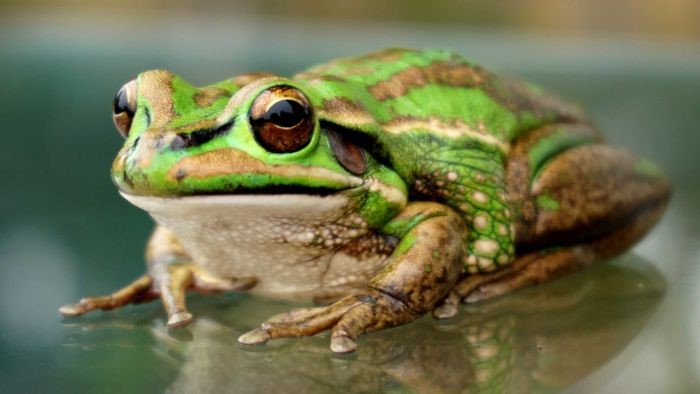 I have been thinking about the Frog Prince, and more specifically about the method, so to speak, of his transformation from frog to prince. I first encountered him a long time ago at the children’s library. The librarian took my mother and me to the shelves to the right of the entryway, where I met Mother West Wind and Tom Swift. I worked my way across and down the shelves four books at a time – the maximum number I could check out – until I got to the fairy tales, a riveting upgrade in drama.

In this fierce new realm bad people, like stepmothers, witches, and Cinderella’s sisters, were punished in gloriously gory ways: burning, beheading, and blood. Good people—aka heroines–were rewarded, usually with a prince, for various virtues: Cinderella persisted in going to the ball, Snow White nurtured dwarves, and Beauty’s compassion transformed a beast. I was hardly into dress-up and dancing, much less homemaking or marriage, but I understood that personal strengths were rewarded. I did have a low opinion of Sleeping Beauty, however, who received her prince merely for falling asleep on the job.

Eventually, I came across the Frog Prince, in which a rather prissy princess makes a deal with a frog: if he will retrieve her golden ball from the bottom of a pond, the princess will allow the frog to eat from her plate and sleep in her bed. The princess gets her ball back, ditches the frog, but when her king father insists that a deal is a deal she has to endure the frog’s proximity. Some nights later, the princess even had to kiss the frog—which turned him into a prince. I didn’t think it would be so hard to kiss a frog, and accepted the rightness of a by now familiar fairy tale trope: eros transforms.

But in the second version of the tale, maybe a couple of shelves down, I read that the petulant little princess, required merely to share her food and pillow with a frog, had a royal tantrum and flung the frog against the wall. I imagined the frog exploding like a balloon filled with Jello, and was shocked that the princess’ rage, revulsion, and rebellion were rewarded with the usual prince. This was a whole new storyline – talk about cognitive dissonance! – and it thrilled me.

Suddenly there was room in the goodnesses of the feminine for the authenticity of no, even if it meant defaulting on a deal, acting aggressively, and defying patriarchal authority. There was, and is, room for protest, even if it’s emotional and messy. This princess – and all our inner princesses – may be rageful, impulsive, and defiant, but they are entitled to no – and to choosing their own bedmates.

The Jungian perspective on fairy tales is principally internal, and considers the characters in the tale (or a dream) as images of individual psychic realities. But before we get to that, I’d like to make the case for a frog-flinging recent event: Christine Blasey Ford’s protest against Brett Kavanaugh’s suitability for the Supreme Court. Her truth hit the media and splattered Kavanaugh’s reputation everywhere.

But Kavanaugh did not become a prince in anyone’s eyes–unless there’s someone somewhere who doubts Dr. Ford’s testimony and the courage it took to provide it. Kavanaugh’s wilding days of inebriated sexual predation belied the “choir boy” persona the PR team had promoted. Perhaps there was some justice for the Justice after all, for when the Kavanaugh frog hit the wall it left a permanent stain.

So where, you may be wondering, is the prince? He resides, as ever, in every woman, and Christine Blasey Ford demonstrated that we all have access to our inner prince. It takes the qualities all those other fairy tale heroines demonstrated, especially fidelity to one’s inner truth, and adds our right to claim it with all the fury and force of an authentic no.

Sisters, if there’s a horrid frog in your life, you know what you can do.

My thanks to Jungian-oriented friend and colleague Lisa Benger, LCSW-R in Brooklyn, NY for a conversation about this tale, and Brett Kavanaugh as an example of an invasive frog who galvanizes the princess into full-blown authentic protest.

Deborah Stewart is a Jungian Analyst and Licensed Clinical Social Worker residing in Cape Cod, MA. She can be reached at www.DeborahCStewart.com  She is a member of the Philadelphia Association of Jungian Analysts, where she co-chairs and teaches in the training seminar. She is an active member of the Inter-Regional Society of Jungian Analysts and participates in other professional organizations. She is co-creator and contributor to This Jungian Life podcast at www.ThisJungianLife.com. She has a special interest in trauma and is the author of Encounters with Monsters: The Significance of Non-Human Images of Trauma in the Psyche.

2 thoughts on “The True Story of How Frogs Become Princes”

This site uses Akismet to reduce spam. Learn how your comment data is processed.